Uncertainty about everything, COVID case, COVID stimulus and the election meant that markets continued their pre-election consolidation again this week, despite almost universally positive earnings reports, both on EPS (manipulable) and Revenue (less so). After a strong rally on Monday, SPX and DJIA faded to close flat on the week. The dollar had an inside week, almost exactly reversing last week’s candle, as did Gold. Oil and bonds also had a very flat week.

Next week has more earnings, but we have seen that the market is not reacting to that. It also has like last week, a huge CB speaker roster, but again markets did not react to those last week either. Unless there is a surprise, either in COVID or the election, it seems this consolidation will continue, which means equity/Oil decline and more dollar/yield recovery (and thus Gold decline). 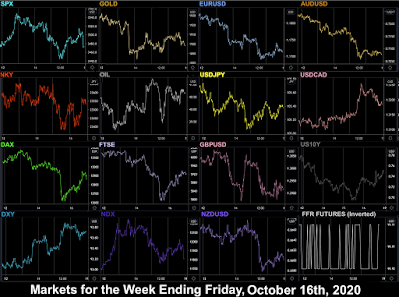 Friday’s rally continued today and NDX outperformed in advance of Amazon Prime day. AMZN and AAPL were both up 5%. The dollar had a fairly flat day, although JPY was down in line with the equities move, as were Bonds. Oil did not follow equities and was down, as was Gold.

JNJ’s earnings beat today was overshadowed by a report from the company that there had been a setback on their vaccine trial. The company’s price fell 2.29%, and DJIA fell 0.58% overall. A warning from the IMF about the long-term effect of COVID on the economy spooked traders, and good earnings and revenue results generally did not help. Bonds rose in line. There was a distinct move into the dollar safe haven around 1230 with Gold, EUR and GBP falling sharply, JPY less so (in line with risk-off). Oil again defied the equity trend and rose. The sterilng fall was exacerbated by a sharp increase in benefit claimants reported, double the level before COVID, as the furlough scheme ends.

Today TreasSec Mnunchin cast doubt again on whether a stimulus deal would be reached before the election. Stocks fell again, with NDX falling further, despite another day of good earnings reports. Today, the dollar was flat against most currencies, but the yen was up, along with Gold and Bonds to make a complete haven trio. Curiously Oil was up, the third day it has moved in a different direction to stocks.

Equity markets and Oil continued to fall today, although a recovery in the US afternoon session meant losses were greater in Europe, whereas the US finished almost flat. The dollar was up, but Gold was up more, as were yields (inverse to bond prices), in line with equities.

The late Thursday rally continued today and but peaked around the European close. A sharp decline in the last hour, probably due to option expiration meant SPX closed flat on the day, and nearly flat on the week. The dollar was slightly down, mainly due to a surge in CAD. All other currencies were more or less flat. Gold and bonds were down in line with the earlier rally, and Oil closed slightly down (Oil expiration dates are different).

One of the flattest weeks this year, with DAX down 1.09% the biggest mover. The largest forex move was AUDJPY down 2.44%. Cryptos were quiet again, roughly tracking equities, and FANG stocks were similarly lacklustre, with GOOGL, which has trailed the others up 3.79%.

My EURGBP trade lost 0.07%, running profit 7.70%, 18/35 wins. This week I am betting on the landslide of the world’s most popular political Jacinda Ardern carrying through and selling EURNZD. 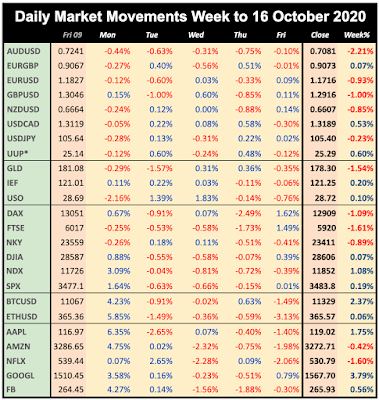 In addition to the CB presidents (who also speak on Sunday), there are eight other CB speakers on today. The Chinese data is the most important. IBM reports after the bell. Historians may be interested to know that the 1987 crash was 33 years ago today.

First of the FANGs, NFLX report after the close, along with SNAP. Dow giant PG reports before the opening bell. There is a rate decision in Hungary.

Market darling TSLA reports after the bell today. Otherwise, another packed day of CB speakers, and inflation from the UK and Canada.

Earnings highlights today are DJIA stalwart KO before the open, and NDX giant INTC after the close. There are rate decisions in Turkey (cut expected) and Israel.

The main focus today will be on the Presidential Debate, held the previous evening after markets closed. There is a rate decision in Russia. Markets are closed in Thailand and Hungary.