Trump recovers from COVID, but worries markets about stimulus. Markets similar to last week
MY CALL THIS WEEK : SELL EURGBP

In a week that saw President Trump appear to recover quickly from COVID-19, claim that the next stimulus package would come ‘after the election’, but then quickly backtrack, even quoting a figure ($1,200 per taxpayer), we saw market conditions quite similar to last week, rising equities (with a 2% spike down on Trump’s initial announcement), falling bonds, and Gold rising on a falling dollar (except for CAD). The only difference really was Oil, which recovered last week’s 7% drop.

October OpEx week sees earnings season open, with, as always the banks (JPM, GS, WFC, and C) along with Dow giants UNH and JNJ setting the tone. The week is also heavy on CB speakers, and there is a further presidential debate on Thursday evening. 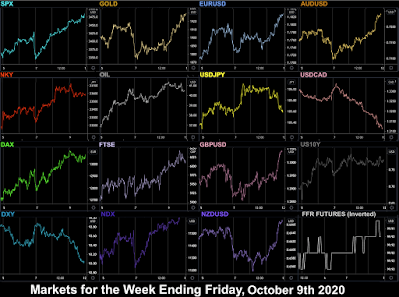 On reports that President Trump would return to the White House after only three days in hospital, equity and Oil markets soared, with NDX leading. Oil joined the party advancing 6% on the day, wiping out most of last week’s losses. Very much like last Monday. Bonds and JPY were down in line, despite an otherwise notably weak dollar, which pushed Gold up.

Things were going well on Tuesday when towards the end of the US market day, President Trump announced surprisingly that the next round of COVID stimulus may have to wait until after the election. SPX dropped 2% more or less instantly and other indices followed suit. Bonds and USD shot up, and Gold fell sharply at the same point. Notably only JPY was down against the dollar. The weakest currency was AUD, after a dovish RBA statement.

We saw the correct intermarket haven reaction but allowing for the fact that the downward pressure on Gold on a weaker dollar is a stronger force than the upward pressure of inverse correlation to equities.

The President tried to repair the damage today, calling (on Twitter of course) for a stand-alone bill and telling the Democrats he is “waiting to sign”. Markets liked this, with SPX climbing smoothly all day to eventually erase Tuesday’s spike. Bonds fell in line. The dollar duly reacted by falling again, except against CAD, possibly reacting to Oil, although the black stuff was flat today, as was Gold.

Another good day for equities and Oil, as markets weighed post-election stimulus ideas with polls showing a Democrat win in the White House and both houses of Congress. The dollar was slightly down, although flat against EUR and JPY. Yields were flat, and Gold rose on the weaker dollar.

The trend continued today, following President Trumps’ increase stimulus offer to the House, meaning US indices posted their best week since July. The dollar fell sharply today, and notably CNY, which had not traded all week due to the National Day holiday, opened 1.45% up, its biggest one-day move since it was depegged in 2005. Gold rose on the weaker dollar, bonds were flat, and Oil was slightly down, taking a breather after a very strong week.

A strong week and breakout into territory not seen since August. All indices were up, and as you would expect for a risk-on week, NDX was the top performer. The top forex mover was CADJPY up 1.74%. Crypto showed modest rises, similar to indices, and FANGS moved generally in line with NDX.

My third week on EURCAD failed, down 0.46%, and the cup-and-handle looks less assured. The running profit is now 7.77%, with 18 wins out of 34, still marginally above half! This week I am selling EURGBP. No significant news today, as we move into earnings season for Q3 and also OpEx week. Markets are closed in Canada, Dubai and Brazil.

Earnings season opens with a bang, with JPM, C and JNJ all reporting before the bell. It is rare to see a non-bank giant report on the first day. There is a rate decision in Indonesia. Markets are closed in Thailand.

The European Council meets all day today. There is a rate decision in South Korea. Markets are closed in Ukraine.

Today’s pre-open earnings are MS, and DJIA component WBA. The European Council meeting continues for a second day. There is a rate decision in Chile.

The IMF meets today, as does the European Council for a third day, but the main market mover is likely to be the fallout from the second Trump/Biden debate at 8pm ET the evening before (after markets are closed). Today is option expiration date for October.