A week ago, I said that Quindell (QPP:LON, or £QPP) was entering an oversold condition below 125p and would bounce. What I omitted to say is how far, which I should have done, as most technical analysts would say that for a downward sliding stock is that when it bounces an oversold condition, it will recover half-way to the last high, and this is exactly what has happened.

From the 13th October high of 166.50p, down to the last low of 123.72p gives a recovery point of 145.11p, which is where it reached on Friday night. I was waiting for this and placed another short, my previous one having been sold at 125p as per my last blog post. Note I could have gone long on the bounce, but I didn't dare, given the second GCR tweet and lent-out percentage of 97.58%. There is another GCR tweet today, by the way.

Sure enough, the instrument is back on it's path downward again, and of particular note is the long-tailed candlestick at 8am this morning, which reached down to 38.2% of new high-low, viz 132.15p. Interesting, isn't it, how these fibonacci points are so accurate. This gives me a clear first target for my short, ie it will try to get there again. (I have to say by the way that the 2p recovery in the last hour today was unexpected, but it doesn't change my view)

In summary the trend is still down, and I will continue to short rallies. I have so far, using spreadbetting, made my stake several times over. I believe this stock is following technicals exactly because there is no news either way on the GCR/Shareprophets allegations.

I have noticed, incidentally that in the last eight weeks, the downward channel range has tightened. See the chart below. The range is now within the blue tramlines rather than the black ones.

Unfortunately for bulls, this doesn't help, as although the tramlines are narrower, they are at the same gradient as the old ones.

As an aside, I am amazed by the amount of emotion generated against people who are bearish on this instrument. It's just a share, like any other, where you follow price/action. I cannot understand why people who are holding long-term write to bulletin boards every day. I am a long-term holder of Minco (LON:MIO) and Fastnet (LON:FAST) and am well underwater, but I know they will come right in the end. I certainly don't care about people shorting them. Also it is extremely unlikely that retail shorting has any effect on any share except micro-caps (with >10% spread!). If only it did - you'd never lose!

Quindell (QPP:LON) put out a 'good' trading update yesterday and the shares fell 7%. They fell another 7% today. My new short is doing well. They closed tonight at 134p. It is possible they could drop to 125p in line with the tramline movement, but if they get there quickly, an RSI oversold condition will obtain. This may well cause a bounce back to 150p. 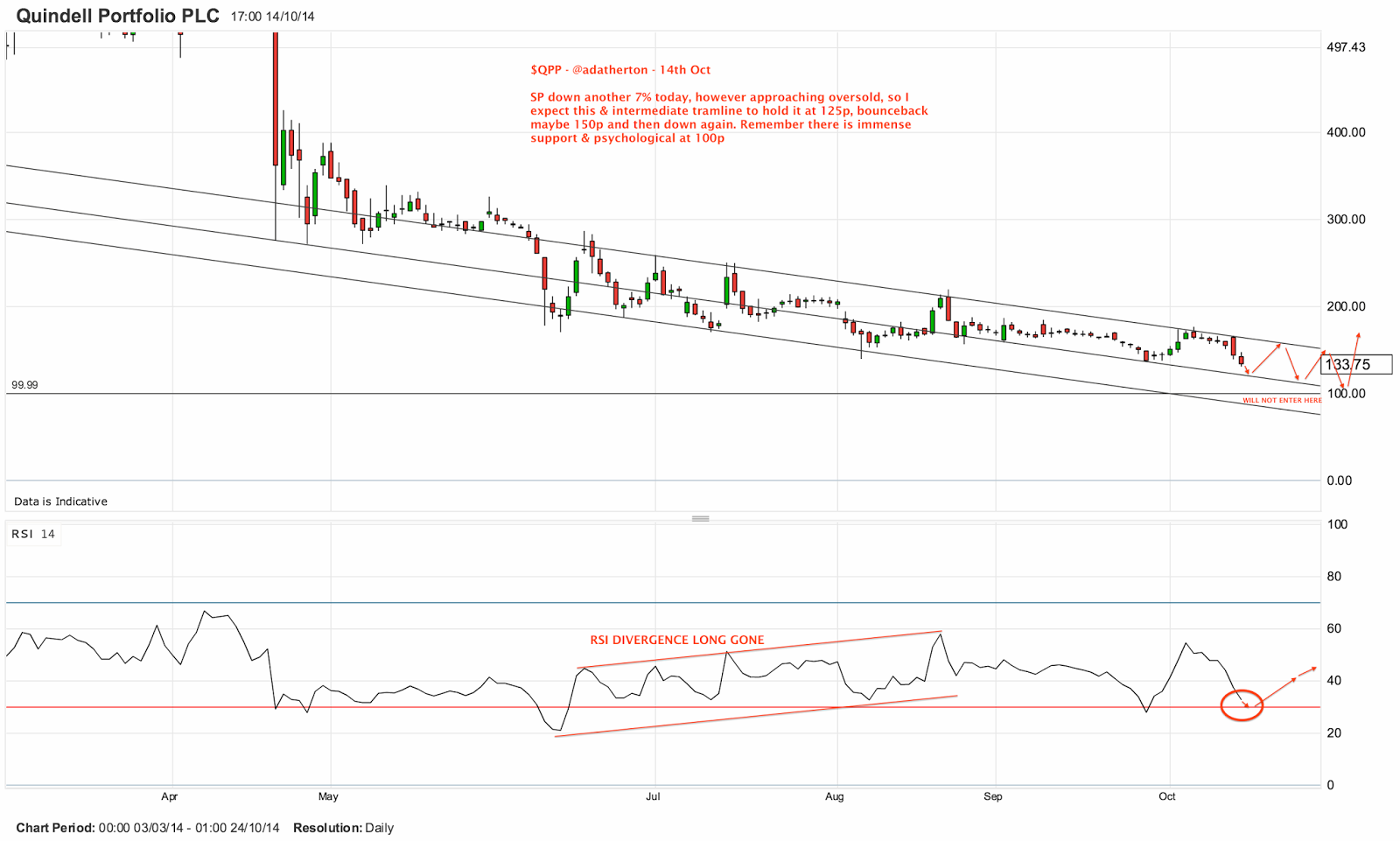 In the meantime, I understand that GCR have been tweeting negative remarks again about Quindell. Perhaps this has caused the price drop. I do wonder whether long-term institutional investors are eschewing this instrument (other than to sell it), which means that the whole market is driven by (retail?) traders. Certainly the volume has dropped right off.

So to summarise, I am holding short again, from that bounce to 165p the other day. I do recommend you set fairly wide stops if short, as the share seems to bounce first thing every morning, before fading all day.
Posted by David Atherton at 18:16 7 comments: