Gulf Keystone Petroleum (LON:GKP) has had a very bad run recently, hardly surprising as they operate very close to the Syria/Turkey war zone. When the share hit the low sixties in October, many people, including myself though it had hit support and bought.

Unfortunately, the price dropped further, reaching a low of 42.5p. In the last four weeks, there has been a huge recovery and the price has doubled from that October 16th nadir, today hitting, but pulling back from 85.21p. Here is the daily chart with some annotations

I would now suggest that it is time to take some profit off the table, for the following reasons:

1. The 14 day RSI is now just over 70, so the instrument is overbought. The last time this condition obtained was the end of June 14, and you can see what happened there.

2. The August 28th gap was not quite filled on September 1st. This may seem like nit-picking for a few pence, but algorithmic trading is just that. The gap was filled today, and gap fills are normally followed a small reversal.

3. There is a lot of resistance coming up. You will notice the share today did not hit the 89.5p spike from August 22nd. If you look at the share price throughout the first half of 2010 in the first chart above, you can see it spent months in the range we are now.

4. This is really the fractal version of the first point (overbought). Note the two red boxes where the charts look similar. This means not only have we risen sharply, the pattern of how sharply we have risen is similar. In this case it is a tangent rather than a parabola. It is more likely than not that what happened after the box last time will happen again.

4a. A further point here is that the last fractal was immediately followed by a gap down. In this fractal we have a classic exhaustion gap up, and as you know, these gaps are the most likely to get filled. The price has to go back to 73p to fill it, which is not a big move given recent price/action.

5. Just above 90p is the 200 day simple moving average. This indicator is a well-known and understood area of resistance and it is likely that by the time we get to 90p, so will it.

So in the short term, I have closed (at 80p) three-quarters of my long from 60p, set the stop loss on the rest to 70p. All nice round numbers. Given the RSI, I expect the price to fall back to 73p, and then rise slowly to avoid being overbought.

This also fits nicely with the monthly chart which has a high degree of symmetry about it, the mirror line being the all-time high. Following this theory suggests a very slow climb back to 90p, taking six months or more, followed by a quicker climb of three months to 130p. That will take us to about August 2015. (Unfortunately, the next part of the symmetry suggest another crash).

I am a position trader in £GKP, not a fundamental investor. This means I take a long-term view, but I do so based on technical signals, not company news. I work on the basis that news drives price direction, but technicals drive price range. Keep looking at the symmetry of that chart. Surely news is not a mirror image.

My targets, first down to 73p where I will buy, then back up to 90p. Will sell rallies and buy dips to 130p, where I will finally exit. Note that I am not planning to short the gapfill!

Why did Quindell drop 20% this morning?

Unusually even though Quindell (QPP:LON) was at a low point on Friday, I took out another short position, and tweeted it, and some people may think why, as the instrument was already at it's lowest price for six months. As I did it at 16:29, I didn't have time to post details.

I have been following the instrument, as you know, for months, and I noticed the price had broken the previous tramline low, and thus was certain to touch the next one, approximately 105p. I also took a calculated risk that the opening volatility, which always seems to happen with this share would pull it, like a magnet to the psychological £1 round point. 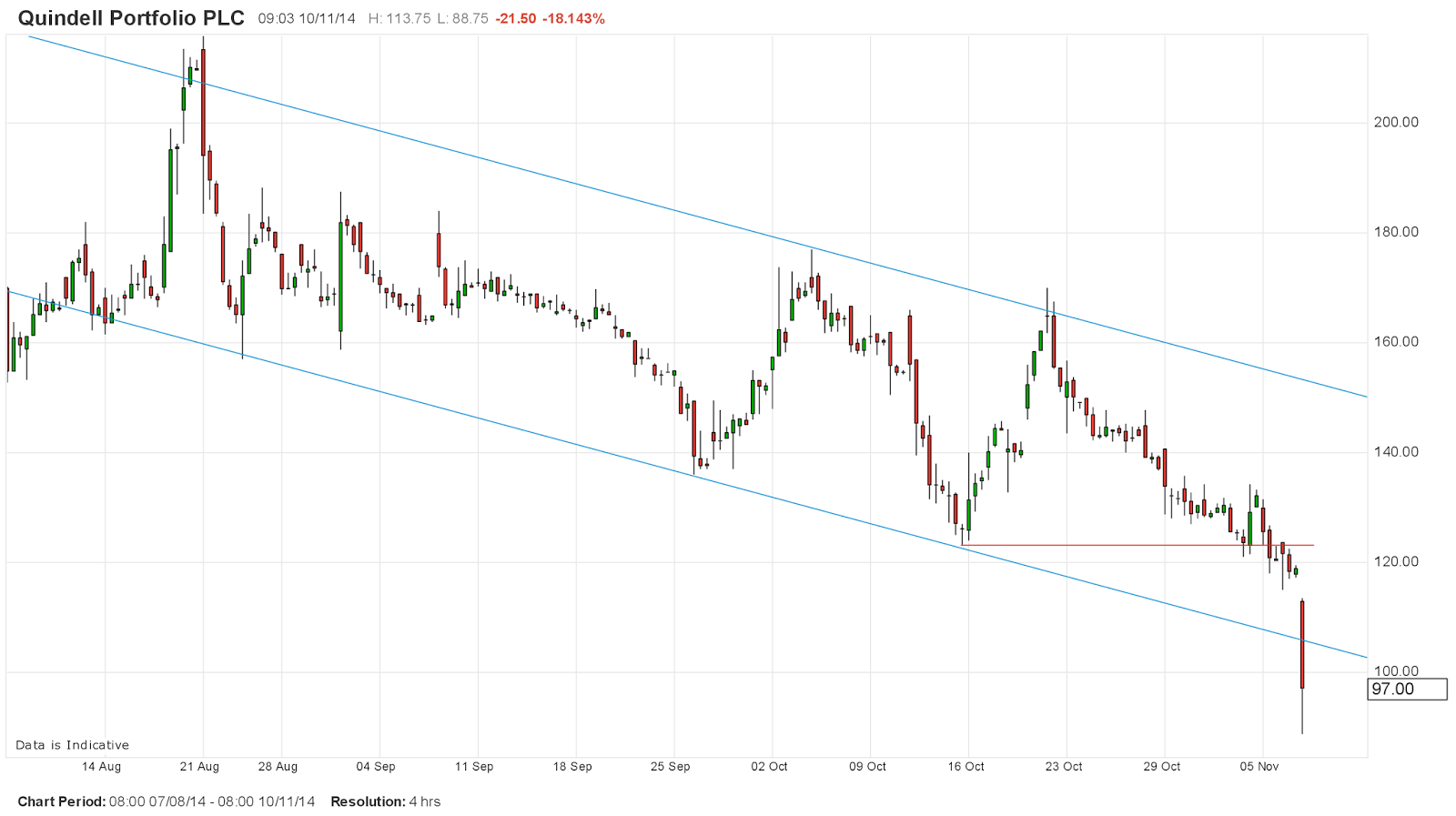 So what will happen now. With this drop, the share has once again entered oversold territory, and so a bounce is inevitable, and indeed it may re-enter the tramlines. (As I write, the price is back to 110p, so indeed it has). The price should then recover to the top tramline (between 140p and 150p) before heading down again.

Alternatively, the tramline support of 105p may now become resistance, in which case 88.75p could be revisited sooner rather than later.

In any event, the bigger picture is still a downward trend, and perma-bulls and other people emotional about this should note the smooth technical playbook being followed, on relatively even volume. 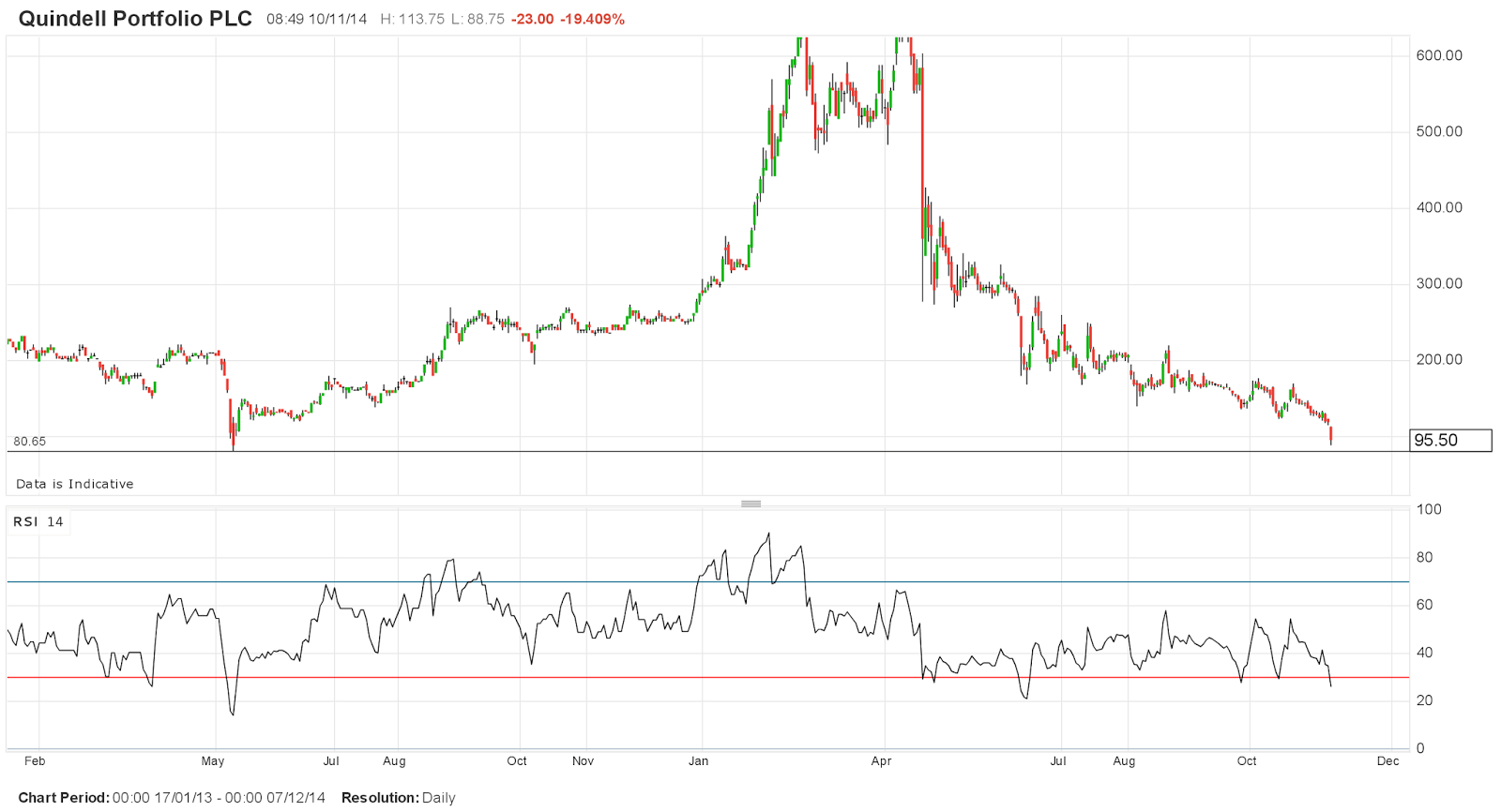 It now seems extremely likely that the price will move all the way back to the all-time low on May 9, 2013 of 80.65p (adjusted for splits). I will therefore continue to sell rallies.

All this assumes no material news, good or bad, about the company.