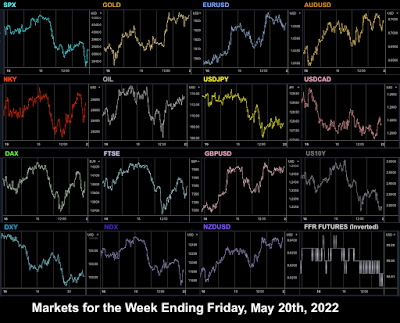 In another volatile week, data took a back seat as markets continued to focus on the Fed’s communication. Chair Powell’s comments on Tuesday cleared up any perceived dovishness during the last FOMC meeting and delivered the kind of hawkish message needed to tame yields and the USD. The Fed “wouldn’t hesitate” to slow the economy if needed, would “consider moving more aggressively” if inflation doesn’t come down and sees the drop in markets as “what we need.” It seems the Fed are more willing to throw the markets under the bus now that they are banned from holding individual stocks.

10-year yields dropped for the second week in a row, and USD weakness helped EURUSD reverse from the 1.035 level at the 2016 low. Meanwhile, stock markets were caught in a volatile crossfire. Falling yields are a plus, but the driver behind the falls—recession—is a negative. SPX made new bear market lows on Friday and looked all set to crash on Monday were it not for the late recovery, after it touched fibonacci retracement levels.

The biggest index mover was NDX, down 4.45%, it's seventh red week. The top forex mover was NZDUSD up 2.14%. Bitcoin and Ethereum were surprisingly flat, and once again, FANGs unevenly underperformed similarly to last week. 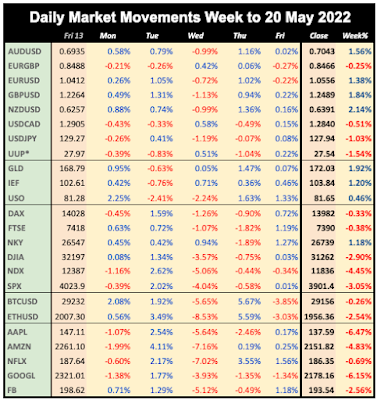 The final full week of May doesn't offer much in the way of scheduled macro news, except for US PCE figures. PCE is the Fed's preferred method of measuring inflation, and Thursday's QoQ print can be contrasted again rising CPI. We also have the FOMC minutes which will be scrutinised closely, particularly for the view on the pace of rate hikes.

Otherwise the market declines do seem to have stabilised for now, although there is no clear consolidation support yet. On SPX, 3835 was the 38.2% retracement of March 2020 low, and 23.6% retracement of the 2009 low, so an upturn seems likely.

CALENDAR  (all times are GMT, volatile items in bold)

Posted by David Atherton at 14:33 No comments:

Early signs of a trend change
MY CALL THIS WEEK : BUY EURUSD 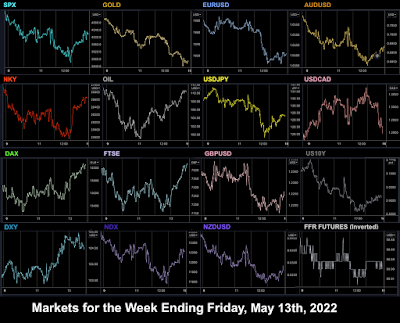 In a week that was light on data, but packed with significant action, the only real event worth mentioning was the CPI print out of the US. This showed some slowing in inflation but was still far from comfortable reading for the markets or the Fed. Even so, it helped mark a change as long-term yields started to pull back. While this may help stocks in the near-term, the catalyst is hardly encouraging; yields are starting to price in a recession. The 3m 10y spread dropped sharply from 2.26% on May 6 to 1.88% this week. With the Fed set to hike 50bps next month and July, the spread could invert next quarter, in which case a recession is almost guaranteed.
Last week’s market price action was noteworthy for several reasons. Firstly, it showed a change in character. There was no Monday/Tuesday bottom and weak Thursday/Friday as previous weeks. In fact, it was almost the opposite with a solid Friday close which cemented weekly reversal patterns. These reversals came from some significant areas.

The biggest index mover was DAX, back up after three red weeks. The top forex mover was GBPAUD down 2.05%. Bitcoin and Ethereum fell hard, and once again, some FANGs underperformed. AAPL finally fell victim with the other FANGs whereas NFLX made a small recovery. 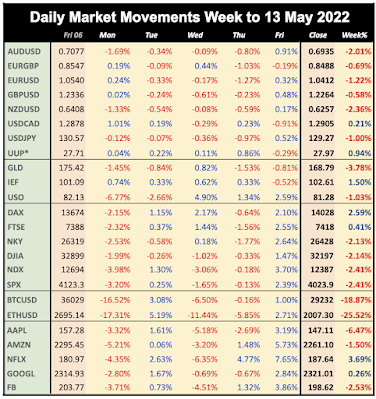 There is no important US news this week, other that perhaps Retail Sales, so the main markets are likely to show the large two-way volatility often seen when VIX is over 30. Even outside the US, the influence are more on currencies. The all-important inflation reports from Canada and the UK are the main macro releases, with Retail Sales also reported from China and the UK, the former estimating further contraction.

CALENDAR  (all times are GMT, volatile items in bold)

Week to May 7th

Resolution of Fed policy only reverses trends for a few hours
MY CALL THIS WEEK : BUY GBPAUD 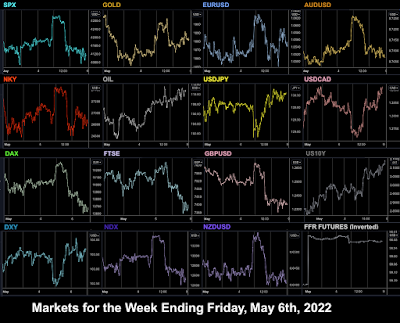 The long-awaited 50bp rate hike occurred as expected on Wednesday, and a comment by Chair Powell that the Fed were not considering a 75bp bhike in June (despite Fed Bulllard's hawkish comments) caused a spike with SPX up 3.4% and NDX up 4.7% in the remaining 90 minutes of the session . This move was fully retraced in the US Thursday morning session, as were gains made.

In another volatile week, the RBA made a hawkish hike, the BoE made a dovish hike, and the Fed were somewhere in-between. The latter made all the headlines and led to the strongest session since 2020. This was all given back just as quickly on Thursday and Friday and the SPX closed the week pretty much where it opened, creating doji patterns on the weekly chart and daily chart. This signals indecision, which is apt as there no consensus on what the Fed will do next. Despite Chair Powell saying the Fed were not “actively considering” 75bps hikes, the markets are assigning a 83% chance of a 75bps hike in June. They clearly believe the Fed has lost the battle with inflation and will have to play catch up. This view can be seen in the continued collapse in long bonds, with TLT down over –5% on the week, and USD making a new 2022 high on Friday.

Last week’s action was a challenge to trade and there were rumours of a fund blowing up during Thursday’s crash. It certainly tested our bullish view, but Friday’s close was off the lows and the weekly doji could lead to a reversal. Bulls now want to see the Fed take a “whatever it takes” stance on inflation in the hope they can ease off later so the terminal rate comes in less than expected. Again, we note that 10Y yields and DXY both have weekly and monthly exhaustion signals, but since these are long-term, the short-term charts could still overshoot.

The biggest index mover was DAX for the third week, down 3%. The top forex mover was GBPAUD down 2.05%. Bitcoin and Ethereum continued to slide, and once again, some FANGs underperformed. Yet again AAPL was relatively unscathed.

Last week's GBPAUD short was the worst trade I could possibly have done, losing 2.05%, which means I am ahead 6.75% this year, with 9/16 (56%) wins. This week I am doing a reversal trade and buying GBPAUD again. 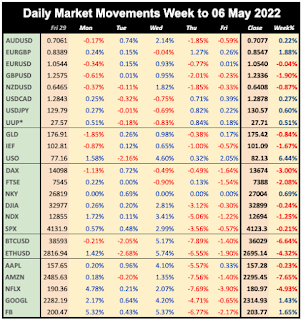 There is only one important release next week which is US inflation (CPI) on Wednesday. As we have stated before, the unemployment part of the Fed dual mandate is satisfied, so the primary indicator of the rate hike path in now inflation, given that the Ukraine effect has receded. In addition to the US, there are inflation reports from Germany and China on the same day. The week is also heavy with CB speakers, with three Fed speakers on Tuesday. Earnings next week is mainly China tech companies.


CALENDAR  (all times are GMT, volatile items in bold)