MY CALL THIS WEEK : SELL NZDCAD 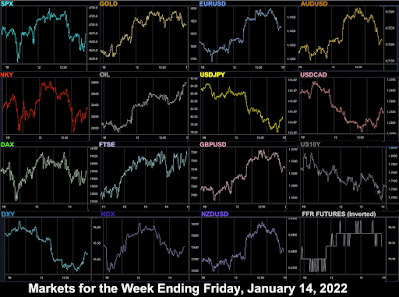 Markets were weak this week. There was an initial spike down and recovery into the Powell hearings (less hawkish than expected), and then the post-Santa sell-off moved into consolidation, with the 7% inflation print, the highest since 1982 spooking markets into giving back early gains, resulting in a flat week. The dollar fell all week, accelerated by the CPI figure, as did yields, although the latter was after the huge move up last week. Incidentally 10-year yields hit the 200-week moving average for the first time since May 2019. Oil made a 6-year closing high on Friday as last week's rally continued. Gold continued to consolidate, erasing half of last week's gains. Earnings on Friday had little effect, JPM only beat estimates with a one-off credit, and along with C the stock fell on Friday.

The biggest index mover was NKY, down 1.44%. The top forex mover was USDJPY down 1.20%. Bitcoin and Ethereum fall ended, and the pair were slightly up. FANG was variable, although less volatile than in previous weeks. 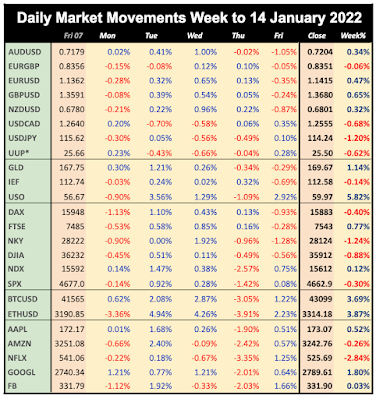 Monday is the MLK Day holiday in the US only, and earnings season starts properly on Tuesday with GS reporting before the bell, followed in the week by Dow giants PG and UNH, and first of the FANGs NFLX on Thursday after the bell. The week sees a raft of inflation reports from the UK, Canada, Germany, Eurozone and Japan on Wednesday and Thursday, and a rate decision on the yen. Friday is January's OpEx day.

CALENDAR  (all times are GMT)

Posted by David Atherton at 12:52 No comments: