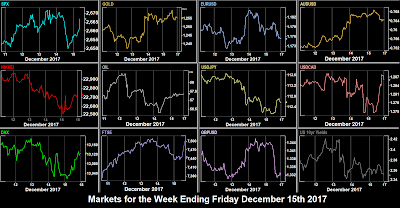 Monday saw the opening of Bitcoin Futures on the CBOE, with an initial volume surge, although overall volume was very small compared to mainstream markets. Here is a chart of the first week of the January future, which traded at a premium to the cash instrument quoted on cryptocurrency exchanges.

Back in the real world, SPX and DJIA continued their advance to new closing all-time highs again, although the picture was not universal. NKY was flat, and DAX slipped. FTSE made gains but this was largely a reflection of weak GBP, down 0.4% on continued Brexit negotiation fears. Oil and energy stocks were up sharply, on news that the North Sea’s main oil pipeline had developed a crack, and would be closed “for weeks” to facilitate repair. NZD was up over 1% on the market’s approval of the appointment of new RBNZ Governor Adrian Orr. The other currencies were generally flat, with USD giving up less than 1%. Gold declined again, its biggest five-day drop in over six months to a five-month low of $1,242. US Treasury 10-year bond yields were up slightly.

Tuesday was a turnaround day for DAX as it often is, and the index recovered Monday’s losses. FTSE continued to rise, again helped by a falling pound, which spiked briefly on the UK CPI beat, before resuming its downward trend. NKY repeated Monday’s pattern, a dip in the Asian session, recovery in futures during the European and American day, to end up roughly flat. However although SPX made another intraday all-time high, it receded to end the day slightly down, as oil gave up the previous day’s gains. The day was strong for USD, with DXY hitting its highest level for a month. Yields were up in line, and Gold hit a new low for the week of $1236.39. The only currency to advance was AUD, which is not part of DXY.

Wednesday produced the long-awaited Fed rate hike of 25 basis points, and a continuation of current policy. As we predicted last week (as about 10% of traders were expecting 50bp), the dollar fell sharply against all currencies, yields were down and Gold was sharply up. The greenback had been falling all day, not helped by a miss on the ‘ex food/energy’ CPI print at 1330, but the pace accelerated after the Fed announcement. Oil also fell, despite the EIA Stock beat at 1530. Indices. Despite all this, SPX managed to eke out yet another intraday high of 2671.88 before closing roughly flat. Other indices were down, no doubt partly because of their respective currency strengths.

Concern about the pace of the tax bill resurfaced on Thursday when Marco Rubio said he would not vote for the bill unless some changes to child tax credits were made. SPX gave up all its gains for the week so far (an inverted-V). The other indices followed suit. DAX had a brief rally mirroring the fall in EUR after the ECB press conference at 1330, however this did not last, and it fell in the US session to finish down. In general USD had a good day, and was up against all currencies except AUD and CAD, the latter seeing a 150 pip surge after hawkish comments from BoC Governor Poloz after his speech at 1725. In line with the USD performance, Gold fell slightly, but yields did not respond and were flat on the day. Notably, the GBP rate hold had little effect on the market, whereas EUR which had rallied sharply on Wednesday gave up over half those gains. Oil touched a bottom for the week, but ended the day up.

Friday saw Senator Rubio change his mind and agree on his  tax bill vote, and SPX and DJIA made closing all-time highs again. DAX, NKY and FTSE were also up substantially as their denominated currencies weakened against USD. GBP and CAD were sharply down to Tuesday’s level, forming inverted-V shapes for the week. Surprisingly, given the dollar strength, Gold and bond prices (inverse to yields) were slightly up. Oil had its flattest day of the week, ending only slightly up.

These are the prices movements for the week on the instruments we cover, with a generally retreating USD picture. However, for the second week in a row, CAD was the worst performer, and so he best forex and overall trade would have been to buy NZDCAD, up 2.4%. Despite the SPX ATH, the strongest index was, for once, FTSE up 1.17%. Only EURGBP had an inside week.

The weekend seems the South African ANC congress, with the party’s announcement of their new president. Expect movement when the markets open. The ZAR is already at a three-month high on expectations that Cyril Ramaphosa will beat the incumbent Jacob Zuma. The week is expected to be light, given the approaching holidays, with the tax bill being centre stage.

Monday opens the final week before the Christmas holiday. It is possible there may be a Senate vote on the tax bill, although it is more likely to be on Tuesday. The only significant data release is Eurozone inflation. In India, results are expected for the Gujarat provincial election, Prime Minister Modi’s state. It is expected to be a pointer to his chances of re-election in 2019.

Tuesday sees the Australian RBA monthly minutes in the Asian session, although little reaction is expected. The Senate vote on the tax bill is expected, and if they have voted Monday, then it would be the House vote. ECB Hansson speaks at 0900GMT on the outlook for Eurozone, and we have the forward looking US Housing Starts.

Wednesday is the final day if the EU Withdrawal Bill Committee Stage, although there is no vote yet, and the aim is for the tax bill to be with Trump for signature. BoE Governor Carney speaks to the UK Treasury Select Committee on the November Financial Stability report, but no volatility is expected there. The Swedish Riksbank rate decision is at 0730. A hold and extension of QE is expected. SEK is 4.2% of DXY.

Thursday’s Asian session has the BoJ rate decision, although this rarely causes the same volatility as other major currencies. In Europe there is a Catalonian regional election. A pro-independence result is likely, although no particular new activity regarding secession is expected. The CZK interest rate decision is at 1200. The major data releases of the week come at 1330, US GDP and the QoQ Personal Consumption Expenditure, an inflation proxy. This is probably the strongest trigger (other than the tax bill) for USD this week. Also important is Canadian inflation and Retail Sales, also at 1330. We know that CAD likes to make strong sudden moves.

Friday is a half-day for markets in the UK, Canada and New Zealand in early observance of Christmas Eve. Markets will be winding down, so volume is expected to be light. However, funds may well be rebalancing, and traders may be closing positions for the holiday period. Canadian GDP is reported, and If there had been a sudden move on Thursday, a print in the opposite direction could reverse that move. It is also the next US government shutdown deadline, although commentators are not factoring this in, expecting there to be yet another extension.

Next weekend, our report will be somewhat shortened, given the holiday period. MatrixTrade is open for business on all days that the market is open.