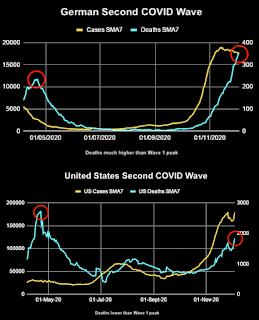 We saw a raft of positive news this week including bi-partisan progress on the stimulus figure, OPEC production level agreements being lower than estimated, and of course, news of the rollout of the three viruses (four if you include the Russian one). Also President Trump appears to have gone quiet on the election, easing the Biden transition.

This resulted in all three US indices rallying to new highs, and the safe haven dollar plunging to lows last seen in April 2018. The drop was uniform, with EUR, GBP, NZD and CAD all making two-and-a-half year highs, and caused another Gold rally. Confirming the positive trend, the yield curve (US10Y-US02Y yields) rose to 0.821%, its highest level since October 2017.

Slight blips such as a delay in the Pfizer rollout, and an NFP miss were shrugged off in the larger positive picture, aided of course by seasonal sentiment.

The gains were not shared by DAX which is underperforming, partly due to EUR strength, but also the huge German second COVID wave being seen not only in cases (understandable as there is more testing), but more worryingly in deaths, meaning unlike, say the US, the infection locus has not moved to a safe cohort (younger people).

The left-hand chart shows the issue by comparing the performance of DAX (in USD, to remove the EUR effect) versus, ie divided by SPX against the number of Germany cases. The right-hand chart goes one further and compares the German case/fatality ratio against that of the US, which removes any testing density variation. You can see the correlation which goes some way to explaining DAX underperformance.

Next week is lighter on data as we move into the holiday season proper. The key events are the ECB rate decision and presser on Thursday, and an FDA meeting on the same day concerning approval of the PFE and MRNA vaccines (these have already been approved in the UK). This is followed by an EU banking and capital markets summit on Friday. Traders will be looking for the ECB view on the exchange rate, plus of course any further COVID news. Scheduled macro data is unlikely to be as important, unless, as always, there is a big surprise. 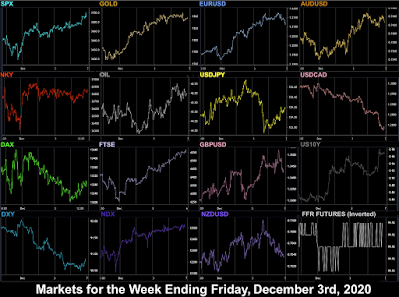 Mon Nov 30
As we predicted last week, there was some profit-taking today after a very strong November, which saw, for example the FTSE 100’s best month for 31 years. SPX fell 0.5% and other indices followed suit. Oil was down in line. After initially continuing last week’s decline, the dollar made a late rally to close 0.2% up, meaning Gold was down. Bonds were flat on the day.

A beat on China PMIs set the tone for a strong opening to the month, with all indices up, and NDX outperforming. The tech index was up 1.52%. Copper, a forward indicator of tech activity (as it is required for all electrical cabling) hit $7,719 per tonne, although Oil fell ahead of the OPEC meeting. The safe haven dollar fell sharply, hitting a new 30-month low, especially after the Powell testimony (nothing new) and the ISM PMI miss. Bonds were down in line, and Gold rose on the weaker dollar.

Markets took a breather today after the ADP miss, and were generally flat except for FTSE which rallied 1.23% after a 1c fall in GBP due to Brexit no-deal concerns. The bond market was more active, with a 6bp rise in the 10-year yield, and a rise in the yield curve (US10Y-US02Y) to 78 points, the highest level for three years, as investors sold Bonds fearing inflation after the COVID stimulus package, which edged closer to reality today with some bipartisan support for a $908B package. This inevitably pushed USD down further against all currencies (except GBP and CAD), and Gold. Oil recovered after yesterday’s drop on news that OPEC would cut production.

Another flat day for SPX and NDX, although DJI managed a 0.29% rise, although SPX hit a new ATH earlier in the day, but pulled back on news that PFE vaccine production levels may be restricted. Yields (inverse to bonds) pulled back slightly after yesterday’s strong move. Oil rose again on the OPEC news. The dollar continued to hit new lows, with JPY particularly strong after being even weaker than USD all week (in line with the stocks rally). The greenback was down across the board, including Gold.

The NFP report at 245k was worryingly below the 520k estimate, but the markets saw this as “bad is good”, meaning that the prospect of QE taper is less likely. As you would expect therefore, markets rose again, with SPX adding 0.88%, and of course the dollar rose (including against Gold) for the same reason. Only CAD was up, following the Canadian NFP beat. Bonds were again down in line, with yields briefly touching 0.984, an eight-month high.

The strongest index this week was FTSE, reflecting a slightly weaker GBP. The top forex mover was CADJPY up 1.69%. Cryptos recovered after last week’s sharp fall, as BTC continues to flirt with ATHs. FANGS were generally in line with NDX with AAPL outperforming.

This week I am buying NZDCAD, as both currencies seem to be at pivots. I would trade the major (dollar) pairs, but it’s hard to say whether the dollar will recover or fall further. At the current level of 90.70, main support is still about 1c lower. Last week's GBPJPY buy was up 1%, taking my total to 8.01% (22 wins out of 40) 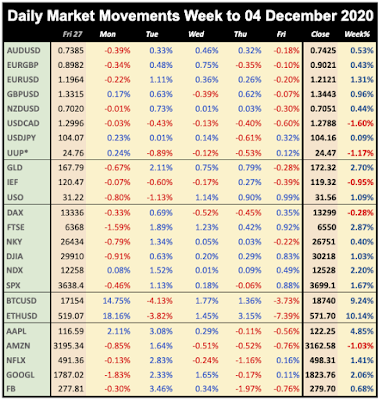 Next week is lighter on data as we move into the holiday season proper. The key events are in Europe with the ECB rate decision and presser on Thursday, and an FDA meeting on the same day concerning approval of the PFE and MRNA vaccines (these have already been approved in the UK). This is followed by an EU banking and capital markets summit on Friday. Traders will be looking for the ECB view on the exchange rate, plus of course any further COVID news. Scheduled macro data is unlikely to be as important, unless, as always, there is a big surprise.

China’s trade balance may set the tone for the day, although the important news comes later in the week.

Another slow data day. Markets are closed in Spain, Italy, Portugal and several South American countries for the Feast of the Immaculate Conception.

A light data day, with the BoC decision as the main news.

The FDA meet today and tomorrow to discuss the approval of the PFE and MRNA vaccines. The EU also meet to discuss COVID.

There is an EU leaders summit today on banking and capital markets. Any surprise takeaways will no doubt affect EUR and thus DAX.