Despite the fact that it was the final short week before the holidays, and macro data was unsurprising, there were three big news items: the new more infectious COVID variant, the US stimulus deal finally agreed, and at the very close of the week, the long-awaited Brexit deal. All markets reacted to the first, only currencies to the second, and only GBP to the last as markets closed on Thursday lunchtime, although there was some more movement in currencies on Christmas Day, notable in EURGBP. Nevertheless the net effect was a fairly flat week, with no index moving more than 1%, as neither did any other asset except GBP and Oil.

Next week is the traditional core Santa Rally, and equities are expected to rise in thin trading, as many traders take the week off. London has an extra day off, so low volumes of forex trading plus the digesting of the full Brexit deal may produce some strange moves as seen on Christmas Day. Again macro news is slight. There may also be some year end last minute rebalancing (which means winners go up further and losers fall further)

I hope you have a happy Christmas and prosperous New Year. 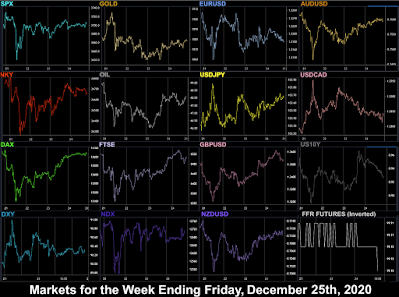 Mon Dec 21
Equity and Oil Markets pulled back today on news of a new, more transmissible strain of coronavirus discovered in the UK and South Africa. The sell off held in Europe, but later trading in the US trimmed US losses and DJIA even managed to close slightly positive. After weeks of decline, the dollar perked up and was up across the board against all currencies and Gold. Bonds were flat on the day.

Good news today as Congress finally passed the stimulus package. Also the WHO confirmed that the vaccines would still work against the new COVID variant. Europe recovered some of yesterday’s losses, and there was a slight rotation into NDX (up) from DJI and SPX (down). However Oil was down on the day, bonds were up, and JPY was up against all currencies except USD, which was strong after the stimulus news. Gold fell on dollar strength. So a mixed response really.

Today was flat for SPX, with DJI and NDX reversing Tuesday’s rotation. Europe continued to recover from Monday’s drop, even against currency rises as the dollar gave up its rally and turned south, posting red candles against Gold and all currencies except JPY, which fell with bonds. Oil was also up on this overall positive day.

Germany was closed, and London and New York only did half-days today. However, the Brexit deal was confirmed before markets closed, and the notable movement was a rise in GBP and consequent fall in FTSE. Otherwise equity and Oil markets were up as Santa sentiment continued. The dollar was flat overall, as JPY fell to balance the GBP rise. Surprisingly though, Gold and bonds were up.

Today was Christmas Day and markets everywhere except Japan and China are closed. There were however, notable moves in forex, with EURGBP adding 1.74% as the GBP rally fizzled out.

My USDCAD trade worked, up 0.64%, moving my running total to 8.67% and 24/41 wins. This week I am selling EURCAD. Last week’s candle up was much larger than usual and I am looking for reversion to mean. 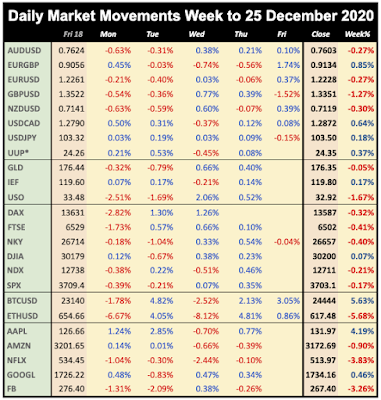 The US re-opens in what is traditionally a very strong three and half days, the core Santa Rally. The UK, Canada, Hong Kong and Australia are closed for Boxing Day observed.

The rest of the world markets open, the first day since the Brexit deal announced late on Christmas Eve. This should prove positive to markets, but there may be some sector variance (eg automobiles, the core part of DAX).

Today is the UK Parliamentary Vote on Brexit deal, however it expected to pass easily as the opposition Labour Party have confirmed they will vote with the government.

The final day of 2020 may see some volatility through portfolio rebalancing. However, as most markets close at lunchtime, general trading is expected to be thin. Germany is closed for Silvester (New Year’s Eve)

All markets globally are closed today for New Year’s Day.