Year of the Vaccine and recovery, First year of Biden, and hints of tightening.

The first full year of the Biden presidency, and of the COVID vaccine program was generally positive, with SPX and NDX both up just over 25%. Notably SPX outperformed NDX for the first time since 2016. There was notable two-way DJI/NDX divergence this year, as the industrial index reacted to COVID, and tech stocks reacted to taper. Foreign indices did better than last year. The dollar recovered last year's losses, as did Oil. Gold was flat on the year, after a 25% rise in 2020. Yields were up 60bp after falling 100bp last year. COVID still dominated everything, and other world events were notably subdued. The most notable factor of the year was the return of inflation, although equally notable. There were no big dips this year in equities. 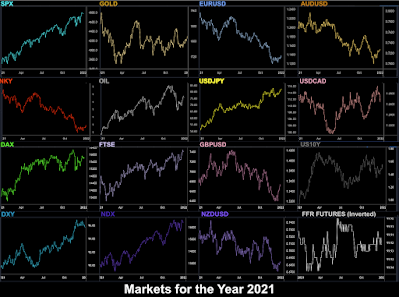 January 2021
The Capitol riots, and a weak NFP kicked off a weak month, with SPX unable to rise at all. NDX did a little better as it had done throughout the pandemic. The vaccine rollout started in earnest as Joe Biden was inaugurated as the 46th president. The "meme stock" phenomenon started with GME rising from $17 to $482 in a few days, only to pull straight back. Foreign markets were down, as was Gold, whereas Oil rose and yields were up above 1% for the first time since the pandemic.

President Biden's commitment to mass vaccination rallied markets, with SPX rallying above and beyond the relatively COVID-immune NDX. Gold fell 6.23% its worst month since November 2016, against a flat dollar. Oil was particularly strong, and yields were up.

March saw the worst equity pullback if the year, (although mild by previous years, SPX down 5.21%, DJI 6.62%), after Janet Yellen made hawkish remarks, and the Fed did nothing dovish. The dollar was up 2.59%, its best week since 2016, on tightening fears. Bitcoin surpassed $60,000 for the first time. Gold was down, reacting to the dollar rather than risk, and yields had their best month of the year.

A strong earnings season, a blowout 916k NFP, the lowest jobless claims since the pandemic started, and continued rollout of vaccine meant a recovery in equity and oil markets. Bitcoin hit a new ATH of $65k. The dollar pulled back after three months of gains, and Gold recovered, against reacting to the dollar. The turn also affected yields, which turned down for the first time in the year.

Sentiment changes this time of year, and with the appearance of the more virulent Indian variant (later called the delta variant), markets were subdued, with SPX flat and NDX slightly down. Another meme stock, AMC, rose 500%, although like GME, never recovered its first high. The dollar was down again, which in addition to the mood gave Gold its best month of the year, and another fall in yields. Oil carried on rising.

June saw the G7 meeting agreeing a minimum 15% global corporation tax, which should have depressed the market, but it seems that the only things that matters in 2021 were COVID and QE. NFP was 'Goldilocks', not too high to trigger taper fears, but high enough to shoe recovery. Even the inflation print, a thirteen-year high, and a hawkish Fed did not prevent modest SPX gains, NDX outperformance, and Oil up nearly 10%. The dollar rose in line with the Fed and Gold consequently had its worst month of the year. However yields fell again, running to a different timetable.

Another good NFP (850k) and quality earnings kept markets moderately buoyant through July, as traders focus moved away from COVID and towards inflation which the Fed declared to be 'transitory' for now. There were definite pullbacks but these only lasted days and were not deep. Oil rallied as OPEC failed to raise production. Currencies, Gold and oil were flatter than usual, although in the absence of anything hawkish from the Fed, yields fell 24.5bp.

Another great NFP (943k) kept markets (although not Oil) buoyant, with the NDX/DJI making a six-month high. Congress passed the $1Trn infrastructure bill. However gains were trimmed later in the month, when FOMC minutes confirmed taper was on the agenda, and Chair Powell at (virtual) Jackson Hole saying inflation was no longer regarded as transitory. The dollar hit a 9-month high, and yields were back up again. The end of the US 20-year war in Afghanistan had little effect on markets.

Concern about taper and the Chinese Evergrande crisis led to a sharp pullback this month (SPX -4.76%) This was expressed very firmly on the massively unexpected Retail Sales print (+2.5% vs -0.1% estimate) which resulted in an instant 0.4% move up in DXY, and 1.73% gain on the month. Notably NKY rallied this month, but admittedly after five months of decline. Gold was down with the dollar move, and Oil down with equities. Yields were sharply up in line with the Retail Sales print's implication of inflation to come. FB, which had been at all-time highs was 10% down after the WSJ published a whistleblower's account of the company's disregard of public safety.

With a low NFP print of 194k, October started badly but strong earnings recovered Septembers losses and more, despite continued hawkish views from the Fed. In fact, SPX and NDX had their best months of the year, and Oil was up 10% in line, with no particular reason except the time of year, and perhaps the continuing vaccine program and general recovery. The dollar was flat, as was Gold.  FB dropped 5% after a one-day outage, but this was recovered a week later. Inevitably the dollar rallied, hitting a 16-month high. Gold was flat.

The rally was halted with another poor month for SPX (-1.01%) on the outbreak of the much more transmissible but, it turned out later, less serious omicron variants of COVID. The long-expected taper timetable announcement was actually seen as positive, removing uncertainty, and mitigated the drop. NDX managed to stay green despite the 31-year high CPI print of 6.2% (which came after the Fed announcement), and the NDX/DJI ratio reached its highest level since 2000. The dollar was of course up, again with flat Gold, but Oil followed omicron and fell nearly 20%. Notably Bitcoin hit a new ATH at $69k. Yields were down.

Despite another low NFP, the year finished nicely with a traditional Santa Rally across US and international markets, all reaching 2021 and in many cases all-time highs as omicron fears faded. The dollar was slightly down, producing a small rise in Gold. Oil rallied over 10% and yields recovered slightly. 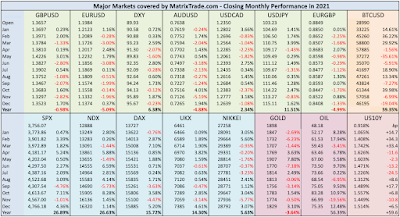